A Letter to Narcissists 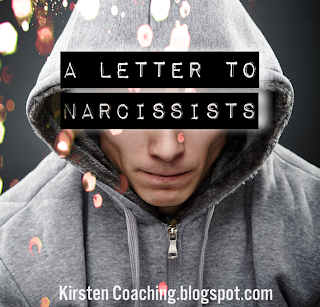 I'm writing this letter, to give you a little insight into your life and relationships. What makes me the authority on narcissism? I'm not, but like many others I have had a lot of interactions with narcissists over the years. It began as a confusion on my part. A, not knowing my own worth, and allowing myself to be victimized by narcissists. It then turned into a little bit of knowledge about what a narcissist is, and then it turned into more knowledge about the disorder. At first I was angry about it. I hated it. But the more I learn, the more I feel sorry for narcissists.

If you're finding that all of your relationships aren't working out, that nobody can seem to get along with you, people leave you all your life, and they blame you. If you feel like you are unlovable, and you are afraid of being left-and then, that's exactly what happens-you might have some narcissistic tendencies. Sometimes when people think of a narcissist, they think of someone who is just kind of selfish, or someone who is very into their looks, or really wants to get their way all the time. Yes, that's part of it, but it isn't the full picture. I realized recently, where sometimes the confusion comes into play with relationships. When you are a kid, you are by nature selfish. You have to be. You want what you want, and you don't want to share, you don't want to take turns, you don't want to do things for others, and you must have things done for you. But as you grow, you learn that life isn't all about you. You learn that, in order to have good working relationships with people, it is a give and take. To let others completely have their way all the time would make you a doormat, but not letting others ever have their way-that's being a bully. Narcissists don't know how to do the give and take. They never moved out of that time frame of life in their mind. The world still revolves around them, and they aren't willing to give and take. They worry that if they don't keep taking, no one will ever willingly give them what they want, so they take take take. They start off relationships and friendships by sometimes being giving, complimentary, listening. But all of this is just enough to let the other person let down their guard a little, get comfortable, and think that they are with their best friend, best boyfriend, whatever.

Then it hits, and it hits like a ton of bricks. You no longer put the other person first-in anything. You want what you want. You have to have it. Why? Because if you don't, no one else is going to give it to you. You want your way, and that is all that will fill you up. So you go after that, you attack it as if it's a career, or maybe even survival. Meanwhile, the person on the receiving end of this is hurt and traumatized at the most, and at the least is extremely confused. They are confused that this sweet, interesting, intelligent, charming (and that's a big one for narcissists), is suddenly gone, and they can't understand where this person went, or if that person ever existed at all? The narcissist is not able to give this friend, this wife, or boyfriend what they need. How can they give something they do not have? Deep down they do not feel like they are enough. “I am not worthy.” “Nobody loves me.” “I will just be left in the end.” But if you'd just stop for a moment and see how your actions are leaving your loved ones no other option, maybe you would change your tune. Nobody wants to NEVER get their way. We all want to be loved, and we all want to have self-respect, and the respect of our loved one. Sometimes in relationships, one person is needier than the other, or maybe they take turns being needy. It's never perfect. However, with narcissists, it's not even possible. Your girlfriend didn't leave because you weren't handsome enough, because you weren't funny enough, or fun to be around. She left because you let her know that you're number 1, and nobody else was going to come even close to being number 2. Your needs mattered more than hers, time and time again, month after month, and maybe year after year. You focused so much on how you were going to get your needs met in the relationship, there was no room for your girlfriend to even exist-so she left. I've heard it said, that it's very hard for narcissists to change. And the reason people say that, is because most narcissists don't even realize that they are a narcissist. My advice to you, if you're still listening, is that you need to practice putting others first SOMETIMES. It doesn't have to be all the time, but it should be about 50/50. You know how I know that life isn't all about you? Because when you get into a relationship, and you get past the honeymoon phase, and you start in with your interrogations, manipulations, aggressive, sarcastic, rude, arrogant, mean, behavior, how does it go for you? You THINK you're going to get everything you need, and you probably do for awhile. Because you've met someone who is so sweet and accommodating, they want you to have everything you want. But then you take it too far, and they get sick of it. In the meantime, you are not happy. You are not happy at the beginning when it's fresh, you are not happy in the middle when you are railroading them into getting everything you want, and you are not happy at the end when either they are leaving you, or you are leaving them because they have become very tired of this behavior and don't give you the same attention anymore. YOU AREN'T HAPPY. That should be a huge warning to you. Life isn't about taking, it's about giving. You met a person who seemed to know that enough to try to do it for you, they just didn't see at first, they were being taken advantage of. But they understand a little more about life than you do, and that's part of why you resent them so much. Why are they happy?? Because they aren't making life all about themselves. They see that to have a happy relationship, it's give and it's take. “Sometimes I will see the movie you want to watch, sometimes I will listen to you about your bad day at work, or bring you soup when you're sick.” But if you are the only one getting anything out of this relationship, then why am I even here? And I know what you're thinking-well if it's better to give, then why not be the giver all the time? Well, it's because the person dating the narcissist realizes that what they're getting in return isn't love at all-it's abuse. And nobody wants that. Nobody wants to be criticized all the time, be made fun of, and yet still be expected to do absolutely everything for the other person.

So, if you recognize some of yourself in this scenario-change it. Don't just be that person who is so oblivious, you don't realize this is you. If you are a true narcissist, I know that challenges your sensibilities-nobody's going to tell YOU you're oblivious. It can be really hard to change behaviors, but my advice always is-start somewhere. Try doing something nice for someone you don't even know. See how good that feels. Start with small things. Learn that you are not the best, and you are not the worst. There is something you can learn from absolutely everyone on this planet, and I know we can learn something from you.

September 22, 2019
It's been on my mind lately to talk about red flags.  We all know about them, we've all heard of them, but do we really know what they are?  Some of us, without a doubt, can see one, and know for certain they've hit a red flag.  And for some, it's a dead stop in a relationship or situation.  While others, will recognize it as a red flag, but proceed forward anyway.  Still others, will not even know they've come across a red flag.  Now, red flags can be deceiving, and what one might think is, another would not.  I thought it would be helpful to call some out here, and some what I'll call "pink" flags which means not necessarily a "terrible" sign, but something to be cautious about. Red Flags: Does not ever see any person from their family Does not pay child support for their kids Pushes, hits, kicks or in any way physically abuses you Goes for several days without contacting you back, without reason You catch him/her in a flat out lie
Post a Comment
Read more

August 29, 2020
Recently, I have gotten back on the wagon of health. I have spent a lot of my life highly addicted to sugar, and in the not so distant past, found myself 20 lbs overweight. I had never felt so tired, and so sluggish in my life. Currently, I am working out at least 5 days/week, and am eating a much healthier diet. I know what they say about diets: it can't just be a diet, it has to be a lifestyle change. That's absolutely true. Diets come and go, but changing the way you think, changing the way you accomplish your goals, is what is truly going to change your life forever. Below, I wrote about the 5 things you must have to stick to your diet and exercise: Have a big enough why This is really important. Your why, is the underlying reason you are doing any of this in the first place. Do you want to look and feel better? Do you want to be able to wear your favorite dress again, or have more energy? You have to have a reason WHY you're doing it all (in any
Post a Comment
Read more